We live in a culture that almost requires haste and impatience. Whether we have children or not, it’s easy to be swept along with the rushing crowd, always on our way somewhere, always late, always trying to do four things at once. In fact, with children in our lives it’s even harder to resist that flow than without them.

Children themselves are often the cause of chaos, my living room resembled the site of a tornado touch down the other night and boy, can a two year old shift it when they want to run! But sometimes young children are the very thing that make us slow down. Sometimes, if we let them, if we walk at their pace, they can remind us of serenity and calm.

Today the Munchkin and I went for a walk in the park. Walking with him at his pace is an interesting experience. There are bursts of quite alarming speed, followed by a complete halt, for no apparent reason. There are puddles to jump in and stand staring at his feet for several long seconds. There are leaves to kick and passers by to stop and stare at. Overall, despite bursts of speed, it’s a slow process getting anywhere.

I try not to let him walk if we’re actually trying to get somewhere, because that would require allowing at least twice as long as necessary for our journey. When he was younger I would wear him in a sling for most journeys but once I became pregnant it got very hard to wear him and he quickly lost patience with it and wanted to go on foot everywhere. For a few months our outings became limited to times when we could hitch a lift with someone but I passed my driving test two months ago and a whole new world opened up to us.

Being now six months pregnant, I need to go considerably slower than I used to and even a leisurely walk around the park is a huge physical strain for me, as my aching muscles can now attest. These days I’m ready to call it a day long before the Munchkin is ready to head home, which results in a battle of wills and some minor acts of bribery. But until that point comes, I value the chance to take my time, not be in a rush to get somewhere and to enjoy exploring the world in the way my son does. I highly recommend that everyone take some time out of the rat race to slow down every once in a while. 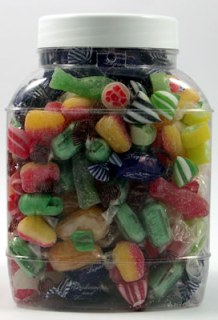 Guess how many sweets are in the jar, or better yet, guess how much the sweets inside the jar weigh. Not including the jar itself but including all the sweets you can’t actually see in the photo….

I’ll give you a little help, you see that green one near the top left? Well the distance from the highest tip of that sweet to the lowest tip of the red stripy one down the bottom is… let’s say 25cm. NOW tell me how much the contents of the jar weigh.

What? You mean you can’t work it out?

No, I couldn’t either, neither can my mathematically gifted husband. Although he does argue that he is familiar with these kinds of sweet jars and would therefore be able to estimate that the sweets weigh 1kg. But he is missing my point a bit.

From looking at this picture alone, with one arbitrary measurement and without being able to see maybe 80% of the sweets in the jar, there is absolutely no way that with this information alone anyone would be able to estimate with any degree of accuracy how much the sweets weigh. My husband is right though, using his life experience, he can guess the weight fairly accurately. But we do know with some degree of certainty that these exact sweets were weighed before putting them in the jar prior to sale. The same cannot be said of a baby in the womb. END_OF_DOCUMENT_TOKEN_TO_BE_REPLACED

I’m in need of a little rant about maternity clothes. First time around I didn’t really bother, I got a couple of pairs of trousers and some generic, non-maternity, stretchy tops and made do. Partly because finances were tight but also because I didn’t feel the need to buy anything special and saw it as a waste of money for clothes that would only be worn for a few months.

I’ve had a change of heart this time around though. I’ll be heavily pregnant right through winter this time, so I want to have clothes that don’t gape and that will keep me and the bump warm. So I bought some maternity jeans, a few tops (which I got in the Next sale in the summer and was thinking ahead!) and a maternity coat (fairly cheap on eBay). The bootcut jeans that I got are fab, if a little on the big side as Next do quite generous sizes, so I ordered a size smaller but they were too small. Sigh. Caught between sizes it seems. I also bought some skinny jeans to wear with my winter boots, but they only have an under-the-bump jersey band. My jeans from my first pregnancy had this type of band too and I really don’t get it. The band just rolls down and wedges itself under the bump. So what is the point exactly? (If anyone has an answer, do please leave a comment as I’d love to know) The jeans are also too big and fall down constantly. The bootcut ones, with an over-the-bump band, do slip down a little, but the band stays firmly over the bump so the jeans don’t fall down too badly. END_OF_DOCUMENT_TOKEN_TO_BE_REPLACED

This article originally appeared on the site http://www.fourmums.com and has since been reproduced in the AIMS journal. I thought I’d get my new blog off to a flying start and include a copy here. Enjoy.

I’m not a science person. I was never that interested in it at school, I don’t think like a scientist, or at least, I don’t think I do. I was always much more interested in the arts and I still am. But I like science, I think science is important and I’ve picked up a few scientific facts throughout my life that have enhanced my understanding of the world.

Birth both is and isn’t a topic for science. It is a normal biological function and can in some ways be studied, categorised and understood in basic scientific terms. But it is also unpredictable and a deeply emotional time for women and their families and so we cannot view it in a cold, sterile, scientific vacuum.

Here are a couple of very basic scientific facts that I think are important in understanding a little bit about human procreation. END_OF_DOCUMENT_TOKEN_TO_BE_REPLACED

This is my shiny new blog!

My name is Holly, I’m married with a little boy (“Munchkin”) and another one one the way (“Bean”). I’m a normal birth advocate, peer supporter and campaigner for change, after the traumatic arrival of Munchkin I knew I had to do something to try and prevent what happened to me and my family from happening to others.

Hubby and I practice “natural” parenting, whatever that means (i.e. to be explored later!) and plan to home educate our kids, so there should be plenty for me to share along the way on this adventure that is motherhood.